Since the start of the second half of 2018, Bitcoin has been on a mini-revival. Clem Chambers, the CEO of the financial market platform, ADVFN, believes BTC reach $20,000. He identified shrinking global money supply and the emergence of favorable regulations as the catalyst for another massive price run.

Speaking at the CryptoCompare MJAC Blockchain Summit, Chambers provided his take on the prospects of BTC saying:

Chambers brings up an interesting point about a likely price slump in the future. Experts like David Garrity, the CEO of GVA Research, believes that the current price gain is only a relief rally. The fact that custodial tools and adequate regulations have yet to emerge might set BTC up for another price dip.

Recently, a macroeconomist, Peter Tchir advised cryptocurrency enthusiasts to be on the lookout for the motive behind any price prediction. According to Tchir, many people deliver BTC price forecasts without any relevant analysis to back up their claims. 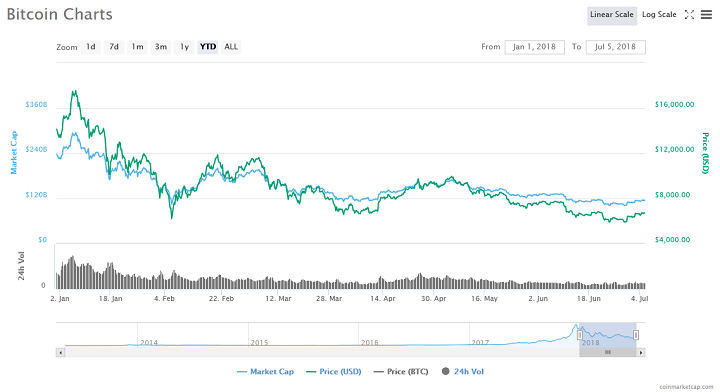 Chambers based his prediction on the fact that there is a global money shortage problem. According to Chambers:

Chambers has identified Bitcoin and blockchain technology as having pivotal roles to play in the future of the global economy. People like Square CEO, Jack Dorsey, and Apple co-founder, Steve Wozniak believe that BTC is the currency of he future. Chambers echoed this same sentiment, saying:

The blockchain will be the way of the future which will be like the internet was to the generation before. Bitcoin will probably be part of that future in the long term.

Bitcoin has lost more than 60 percent of its value since the start of the year. it is, however, on a something of a mini-revival, gaining 10 percent in the last seven days. Favorable news coming out of both Switzerland and Malta have been identified as the likely reason for the recent gains.

There are reports that Switzerland is set to offer conventional banking services to cryptocurrency companies. Such mainstream business support is likely to galvanize institutional investors into the market. In Malta, the country’s Parliament yesterday (July 4, 2018) passed three blockchain laws, becoming for the first nation to create a proper regulatory framework for the industry.

Do you agree with Clem Chambers’ BTC price prediction? What is your end of year price prediction for the top-ranked cryptocurrency? Keep the conversation going in the comment section below