Mining is an integral part of the cryptocurrency and blockchain technology narrative. However, the process of discovering, validating, and adding new blocks (mining) to the chain has the potential to do more than increasing the money supply of a particular cryptocurrency.

Apart from being responsible for creating new tokens in a cryptocurrency blockchain that utilizes proof-of-work (PoW), mining also serves to protect the network. It is this function that is perhaps even most relevant for any examination of the positive elements of the mining process for distributed ledger technology (DLT) framework.

Essentially, miners act as gatekeepers to help keep the blockchain running smoothly. On the blockchain, all transactions are linked to one another through blocks. As another transaction, or block, is added, the chain lengthens.

To mine on the blockchain, users who lend their computing power (called miners) are presented with a puzzle to solve. Once the puzzle is solved and confirmed, the miner is rewarded with a payout (typically, some cryptocurrency or token) and a new block is added to the chain, in addition to transaction fees.

While blockchain mining has typically been associated with Bitcoin and other cryptocurrencies, this is just one minor example of how mining can be utilized within decentralized technology. Let’s take a closer look at blockchain mining and the benefits that it provides miners and society as a whole.

When Satoshi Nakamoto created Bitcoin, and with it, the first ever successful implementation of the DLT framework, the stage seemed set for the emergence of a fully decentralized digital space. Data democratization or the return of control over user data to the users themselves is a cause that has attracted the attention of many in recent times. 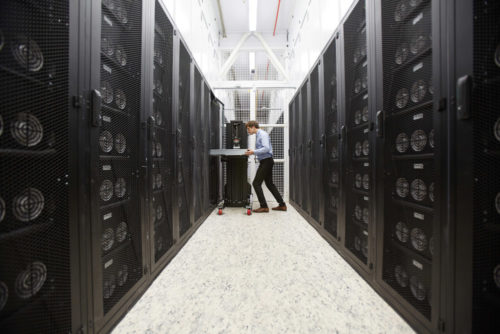 In theory, public blockchains are decentralized, meaning that data ownership isn’t domiciled in any central server as with the mainstream internet. Every day we spend in our digital world means we are creating data. We may not think about it consciously, but the data we generate is utilized by many companies to improve their systems, as well as their profits.

Often, though, we have no idea what is being done with our data until scandals arise, and we don’t typically see the value that can be created using this data. Those in the blockchain world have fought for the democratization of data, but up to this point, there hasn’t been a platform created with this purpose in mind.

Mining can be used to drive positive social engineering in the digital space. Projects like Lambda have even begun examining such use cases that utilize the transaction validation process beyond the creation of new cryptocurrency tokens.

Using Lambda as a case study, it is possible for the activities of mining nodes to cause positive changes in the global business process. Recently, Ethereum World News reported that Lambda launched the first ever blockchain open-source proof-of-space-time (PoST) protocol on GitHub. Miners handle data, and as far as a blockchain is concerned, such data amounts to a massive volume.

Nearly every industry can significantly benefit from blockchain mining, especially when used as a solid foundation for the development of services and products. So far, we have seen blockchain mining in a decentralized environment lead to advancements in the health-care, education, and finance industries, to name a few.

When done correctly, mining on the blockchain can also lead to considerable profits for miners. For some, mining has even become a full-time career. Also, it’s relatively easy to begin mining. All a user requires to become a miner is a home computer and an internet connection.

Overall, mining offers a new way of earning money, participating in a real blockchain project where the user holds tokens, and a way to give back to the community in which they’re participating by verifying information, as well as helping to advance so many industries by mining data for insights.

Many view investing in the blockchain as solely a financial endeavor. However, with all of the benefits that miners bring to the cryptocurrency world, mining can provide a higher return than purely financial investments within decentralized technology. Are you ready to start taking advantage of the benefits of mining for blockchain?