As covered more in details in our previous Cardano related piece, CEO of Emurgo and IOHK both publicly shared their standing and believe on why Cardano as a project has lacked in development in various crypto-industry spacious as they pointed their finger to the lead of Cardano Foundation for the fault.

Cardano [as a project] split up in three entities: IOHK [responsible for developing core protocols that compos Cardano], Emurgo [building partnerships with developers and instigating projects for the Cardano protocol around the world] and Cardano Foundation [to promote the Cardano protocol, to grow and inform our community and address the needs of the community. These are broad aims and cross demographics and borders].

You can read the complete letter here:

An Open Letter to the Cardano Community from IOHK and Emurgo

Following up, the community awaited the post by both leaders with positivity as first and foremost Charles Hoskinson is a well known and respected individual throughout the crypto-community and as enthusiasts added – the project is in good hands as IOHK and Emurgo are stepping in. 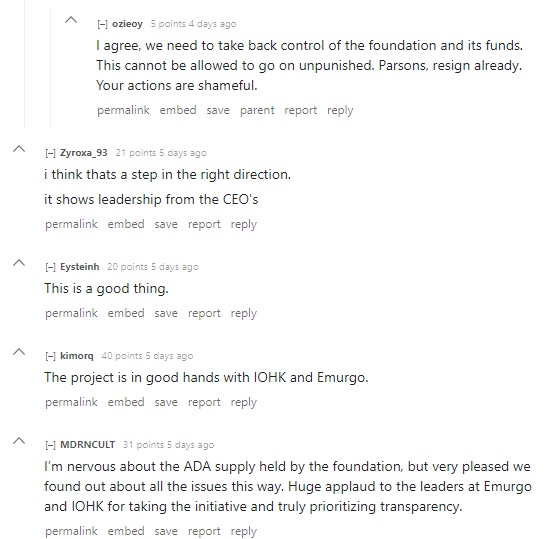 Your supporters are not going anywhere Charles, We love you, IOHK and ADA – Nikolas X on YT