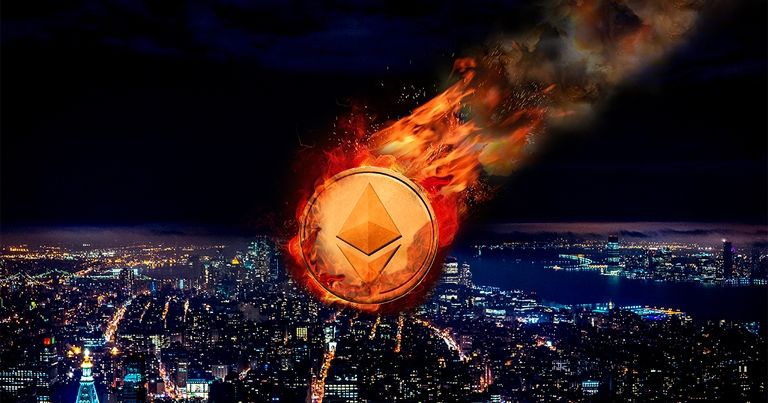 Ethereum Taking Over Crypto Future – While Bitcoin Struggles with Regulatory

For quite some time now the market is very depended to the news that are announced towards Bitcoin’s Regulation especially from China as the officials have been the first to take action against ICO (Initial Coin Offerings). That was followed with Bitcoin-to-fiat exchanged being terminated and now words are flying around that BTC mining and mining pools will be shut down.

While digital currency token prices are very linked to speculation, the first moment news comes form GOV decision they are either hoisted up or tanked to the bottom. Bitcoin’s price dropped slowly from $5,000 to $4,000 and then finally below $3,000.

Being considered like commodities, following cryptocurrencies did get an impact in price also by Bitcoin as almost all had sell-offs and crashes in price. But as time goes by, the second in the row is taking the stage with ‘big headlines’ when  it comes technology advancements and the blockchain tech future – Ethereum.

Founded by Vitalik Buterin, Ethereum is a blockchain technology that runs more like a protocol than a currency, despite its token ETHER or known as ETH which can be paired and exchanged with currencies in a global scale.

It has rise to a market cap of $27 million and once it did hit the $400 mark/token, while now it is trading just below $300 with the recent development. Since January when it price was $8 the increase in price does count up to 3650% almost 10 months only. Ethereum does follow Bitcoin in many aspects and traders or investors are considering the fact that if they do not see Bitcoin having success then there is no belief in Ethereum.

However an optimistic change towards that kind of understanding for Ethereum could be coming as soon as the end of this year. The technology itself on the protocol, the uses it finds and regulations are not hindering it as Bitcoin is having a rough time about them.

Bitcoin is planned and meant to be a currency of the age to come – decentralized, privacy appreciated and so on, in which idea it is quite lacking and failing to do so in many ways (by many well known figures it is considered a storing value while Litecoin could take the place of daily use more than BTC). Ethereum on the other hand is trying to find practical and utilization of the Blockchain and its ledger Tech which opens doors for many future movements – very important to mention the Smart Contracts.

Smart Contracts are self-execution-able agreements in code language. For example, an auto-paying mortgage agreement on any rate that could be fixed or adjustable. Just this is being considered all around the world by officials and lawyers, for instance the State of Arizona are open to elaborate finding use of the technology.

Ethereum Thinks Bigger – is Bigger than just a Currency

With that the understanding of Ethereum more like a technology advancement than just a currency made real by a certain technology. “Wiser to contribute or invest in the internet itself than just one website”. Keeping in mind that a dot-com crash could struck Ethereum in the move like the entire internet’s inherent value could have crashed. So the demand and investment potential of Ethereum grows in value as ETH is needed more to run the above mentioned protocol. ETH is returned to miner or “stakers” (those that fold on ETH for value confirming) that call positive on transaction completion.

Ether even does make possible other coins and tokens that are known as ERC20 tokens that enter the market with Ethereum’s protocol technology. Initial Coin Offering-s are based on the same way, even that some Countries are putting regulations up against ICO-s, there are ERC20 tokens that have been hit by the mainstream factor – OMG – short for OmiseGo is the token that made the first billion dollar on its category and very famous especially in Thailand as it is used as a payment method in Mcdonalds.

There is the big difference – Bitcoin has to make its place and be accepted in any way by the world and its economy as a currency while acting as a could-be-decentralized value in a very centralized space. However for Ethereum it all needs the desire of the world to develop, grow and utilize the technology that is so much anticipated. If the Internet 3.0 or new-age internet would be based on Ethereum, than stopping a currency is much easier by states than a protocol.

For long term investors this means that Ether will continue to grow in technology foundation while BTC waits for news and countries to accept or regulate towards it in any way.

Look-Out for News – Change is our Way

For every update that hits the Ethereum network, its market domination on the second place grows so wait out for news, updates and changes as many are coming.

On a very recent meeting Vitalik Buterin did comment on the scale issuing as it could be taking place of many protocols known world wide for future to come. For example Bitcoin processes 3 transaction in one second, Etherum 5 or Visa thousands. Even that the last one seems to much, the team behind Ethereum will stay behind Ether to reach that number.

One method to do so is the “Metropolis Update” that is tested and to come in the near term. It is made with the cause of a better scaling infrastructure. On top of that news of security strengthen are incoming.

“The upgraded Ethereum blockchain is to also ensure a higher level of security through masking such that users will be able to determine the address for which they have a private key. Additionally, it will be able to withstand hacking even from quantum computers.”

A very important update is the so called Proof-of-Stake, with which ETH holders will be compensated and returned like miners are for holding the ETH. It is being expected to have a positive reflection on the price:

“The demand for ETH is expected to witness a significant rise as the date for update approaches despite the fact that we are yet to see any significant increased demands with announcements in this regard thus far.”

As the cryptocurrency fame in general is growing – more attention and demand is to come. The only time that the value could crash is if it does not deliver on promises, which is not to be expected for Ethereum. True value will be provided by the Protocol with its technology succeeding which will have an exponential rise.

Appreciated surge in price by holders will take place as demand grows against the limited number of supply for ETH. There is still time to be a long term investors and see the future now as many are stopping themselves towards cryptocurrencies because of some news related to Bitcoin.