The past few days has seen several publications and crypto enthusiasts notice that the popular social media giant of facebook has advertised 5 job vacancies related to blockchain technology. The open positions are all based in the company’s headquarters of Menlo Park, California, and are as follows:

A screenshot of facebook’s career page with the 5 job openings has been provided below. 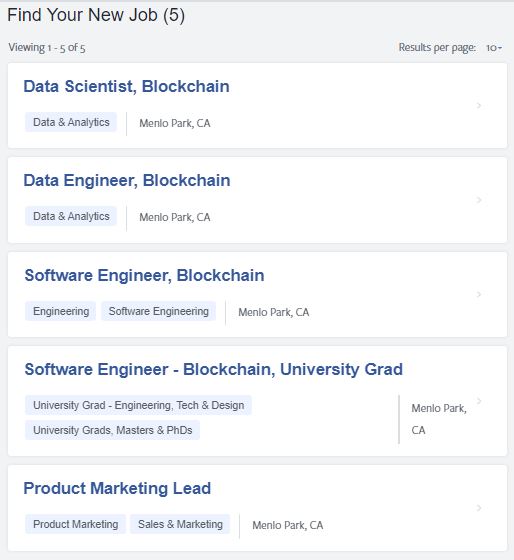 The last job opening in the list is for ‘Production Marketing Lead’. The facebook career’s page goes on to explain the type of role the successful candidate will be doing.

Our blockchain team is fundamental to that mission and we are seeking an experienced leader to build and manage a new product marketing team focused in exploring the opportunity the blockchain will bring.

This person will be responsible for creating our product strategy for developers and consumers, managing our product go-to-market plans and coordinating a cross-functional team to bring great solutions to connect the community.

Another aspect of the job opening is that its minimum qualifications requires the preferred candidate to have experience with payments or the blockchain.

The facebook platform has had a tumultuous history with cryptocurrencies and blockchain products. The site had placed a blanket ban on all crypto and blockchain related advertisements for fear that some were using the platform to advertise scams. The ban took effect in January this year.

The ban was lifted by June and many speculated that the team had noticed the revenue potential of such advertisements. The company however put in place a screening process for projects willing to advertise on the social media platform.

Given the progressiveness and drive for technology evident in the team at facebook, it is only natural to assume that  the idea of a cryptocurrency on a facebook blockchain network has crossed their minds.

Back in August, we saw facebook’s blokchain boss, David Marcus, leave the board of Coinbase to avoid a ‘confict of interest’ between the two firms. There was also rumors in the crypto-verse that Stellar (XLM) and facebook were ironing out a partnership.

With the firm’s vast data centers, creating or integrating an existing blockchain network would not be a problem. Integrating nodes in these facilities would be easy as one, two, three.

The new job openings at facebook have all pointed towards the social media giant doing more than just using blockchain technology. With over 2 Billion active monthly users, facebook cannot ignore the fact that such a user base can use a native cryptocurrency for the following purposes:

What are your thoughts on the recent job openings at facebook related to blockchain technology? Do you think they could be working on a cryptocurency? Please let us know in the comment section below.