So you thought the Bitcoin Cash (BCH) hashwar was over? Not so fast.

While bitcoin and the rest of the market has been crashing this weekend there has been one, perhaps surprising, bright spot amidst the wreckage – Bitcoin Cash SV, the forked coin from the original BCH, which is itself a fork from bitcoin (yeah, it’s getting silly).

Bitcoin Cash SV (BCHSV) is 3% higher against the dollar at $65 in the past 24 hours and 20% higher against bitcoin. Compare that to BCH, which is down 21% during the same period to $163, according to coinmarketcap. BCH is now trading at its all-time lows.

Calvin Ayre (pictured above), the multimillionaire behind the CoinGeek mining pool that has been doing the heavy-lifting for the SV network, seemed to have declared the end of the hashwar as EWN reported a few days ago, backing down from threats of lawsuits against exchanges for assigning the BCH ticker to the “official” BCHABC hard fork.

With that in mind, CoinGeek and nChain, the startup owned by Craig Wright, have formed a formal partnership on the Teranode project to bring 1 Terabyte blocks to the SV chain, to deliver network throughput seven million transactions per second. If achieved, that would be a network fundamental worth getting out of bed for, assuming the not-inconsiderable technical issues can be overcome and that people start using it to buy goods and services.

“Teranode is my baby. The first prototypical iteration of Teranode was just born after the November 15 hard fork of BCH. As we are watching Bitcoin SV in real-life action, we are studying performance hurdles and building new solutions for the enterprise-class Teranode.”

He added: “It’s time for Bitcoin to grow up and professionalize. We appreciate CoinGeek’s support in that journey make Bitcoin useable for the world’s major enterprises.”

Mentioning BCH and BSV is a bit like swearing in the crypto community of late, with the hashwar blamed for triggering the latest crash episode in the crypto bear market.  But industry politics and the blame-game aside, SV are trying to build something useful.

And if prices are anything to go by then, market participants may be taking notice.

In truth the hashwar wasn’t actually conclusively won by BCHABC.

As can seen in the chart below from coin.dance, the Bitmain-controlled mining pools were emphatically winning the war up until 20 November. Since that date, however, it has been a different story. 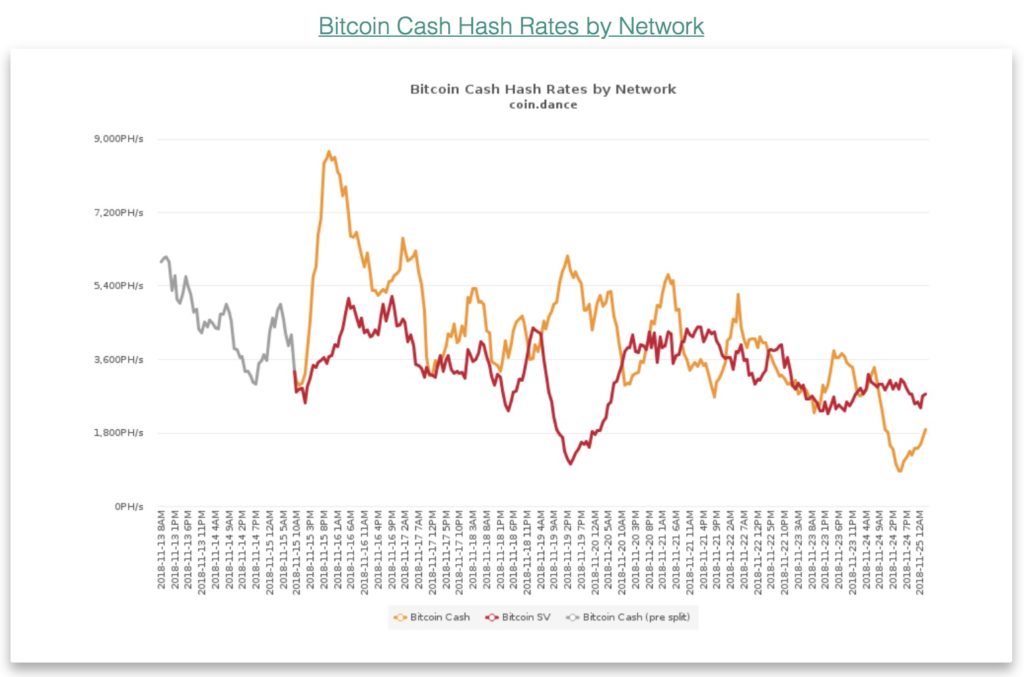 But a healthy chain does not live or die by hashrate alone. There’s other factors such as node density, industry support and adoption to consider.

Taken all of those as a whole, pretty much all the major exchanges have decided that BCHABC is the real BCH. That’s fair enough but what happens if the price of BCHSV rises above BCH?  Will they swap? Probably not as it would create even more confusion than already exists.

Crypto’s equivalent of share buybacks on the stock market

But there is a bigger question here about how BCH – both versions – are valued and priced given the losses being incurred by the miners.

Both the Bitmain and CoinGeek-nChain complexes have been losing money on their mining operations, collectively amounting to as much as $10 million, assuming BitMEX Research is accurate.

According to coin.dance, mining on BCH is now 1.1% more profitable than mining bitcoin. For BCHSV it is a different picture. It is currently 237% less profitable to mine BCHSV than it is to mine bitcoin. Put that another way: the mining losses in the SV camp are growing while those of BCH are lessening.

Sure, the BCHSV mining losses can be offset if the price rises, as it is doing at the moment, although that may not last.

The bigger issue though is how miners can indirectly manipulate price through their network activity. CoinGeek, simply by throwing hashrate at the network, has been able to stay in the game long enough to become of interest to day traders, although that, to be fair, was not necessarily the primary objective.

And of course the same could be said for Bitmain and Roger Ver’s efforts to promote and sustain BCH since inception in August last year.

It is somewhat akin to what’s been happening in equity markets in the past few years, with companies borrowing money to buyback their shares, thereby artificially pumping the price.

Before the BCH fork there were rumours about the SV supporters having “a lot of hidden hashrate”.

Hidden or not, there are wider implications for crypto regarding decentralization (or the lack thereof) that market participants have surely been mulling over in the past few days, with a handful of wealthy individuals able exercise centralised control.

In this unregulated space there are no rules about insider-trading but the suspicions of many, justified or otherwise, were that some insiders may have been positioning to make a killing by selling up before the fork in order to buyback more cheaply later.

A source at nChain has hinted in comments to Ethereum World News that this may well have been the case.

“I sold all my crypto before a few days ago. All out war were [sic] happy to see the price of both BTC and all BCH forks plummet short term”

If you want to know more about CoinGeek and presumably nChain’s plans for upgrading the SV network, or just to pick up some gossip, CoinGeek’s conference begins in London on 28 November running to 30 November. Only problem is the tickets are priced between £800-£1,500 so you might need to ask one of your billionaire mining buddies to help with costs.